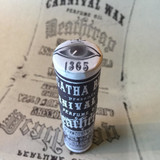 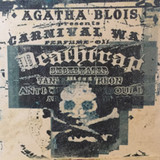 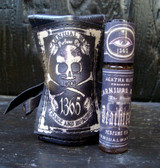 Glass roll on bottle in a magical lookin' pouch.
Packaging all handmade and subject to change - Ol' Rudy likes to make cool shit.

Please note: order processing time is 7 to 10 business days - all Carnival Wax products are made to order and hand poured.

I adore the sublime scents of Carnival Wax. Genius , smoky and smooth scents that make me feel like I am in a ship’s galley or in a leather chair with a glass of neat scotch next to me- Lagavulin , of course.

This scent is really something. It smells great out of the bottle but once applied it really settles in and becomes even better. It’s a long lasting scent and even after a shower it still lingers. I’ve been asked several times what am I wearing And it’s only been a few day’s. A1 shit!!

This is by far, one of the most alluring scents I’ve ever encountered! I’ve wanted it for many years and now wear it day and night. It’s as is I’ve just walked into a humidor/cigar lounge while sipping a scotch.

I bought a couple of selection sample packs thinking that from the descriptions I’d likely end up with BlackAmber2 but DeathTrap just blew me away. Out of the 12 in the samples it stood out as a perfect mix of sexy musky sordid yet male essence. I really do quite adore it. It may be my new self medication! Addicted.

I've been wearing this for years. The spicy, earthy, bourbon scent has a sexiness to it.

These perfume oils smell amazing and last forever! I'm constantly being asked what I'm wearing bc it smells so good! If you're looking for something that smells fantastic and that's different from everything else out there, then you've come to the right place!

This whacked me in the nose when I smelled it in the sample vial. I was afraid of that smoke/ash note, it seemed to be so potent. On me, though, I couldn't keep my nose from my wrist! That insanely addictive smoke, ash, and patchouli twined up with the vanilla and woods to create the most insanely gorgeous combination I think I've ever smelled. It smelled like grown-up marshmallows over a campfire... no, a giant raging bonfire! This will probably be my first bottle purchase because I don't think I can live without it.

This is by far the most potent and intoxicating scent I have ever come across. It's carnal. It's evocative of pure sex, without smelling like actual sex. Few fragrances can have such an impact on me, and this one works extremely well with my skin chemistry. And so strong. The fact that it's an oil and stays close to my skin just amps it even more. It lingers, and I can still smell the delicious remnants of it on me even a day after I apply it. Worth every single penny, and then some.

The slightly sweet Vanilla Bourbon and ashy scent combined reminds me of roasting marshmellows by a bonfire as a child. I'm happy that this scent isn't too sweet, the wood and patchouli are warm and soothing. This is the sexiest most comforting scent, I have the urge to even put it on before I go to bed at night so the scent can relax me before bed but I don't want to waste it!

wow bought the gipsy oil and I have never been asked so many times what I was wearing. It is intoxicating. You will not be disappointed!

My boyfriend tried on this fragrance at the Devil City Store in St Louis, and up front it's kinda a slap in the face, but as the night went on and the scent mellowed, it was very masculine, and intruiging. The smoke and ash mellow out and you get this musky smell of a sexy guy in a bar waiting to take you home.... and he did, so I'm happy! Buy the Deathtrap!

like all the best parts of a creepy creaky old roller coaster at some run down amusement park. the wood notes and the smoke and ash combine to give a deep slightly acrid top note but the bourbon and antique patchouli leave a lasting base note that lingers all day. I want to ride the death Trap forever!

Let it rest on your skin awhile and you'll understand it's magical powers. It doesn't matter what's in this fragrance, it only matters that it has the ability to calm and excite the senses all at the same time. Indulge in this dark and mysterious liquid before you retire for the evening and give in to it's magic, you won't be disappointed!